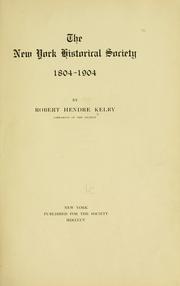 Published 1905 by Published for the Society in New York .
Written in English